In his military career, Mr. Korody handled more than 200 courts-martial and more than 100 administrative hearings.  He had amassed more courtroom and litigation experience than all but a few active duty judge advocates in the military.  He received numerous awards and vast recognition for his service.

In 2015, Mr. Korody decided to use his decade of comprehensive trial and litigation experience to provide superior representation to members of the military community as a civilian attorney.  He has fought on every battleground, at every level, and knows how to win.

Mr. Korody served his country with pride for 10 years as an active duty U.S. Navy JAG.  A due course officer, he left active duty in November 2015 at the rank of Lieutenant Commander, and currently serves in the Navy reserves.  In 2017, Mr. Korody was selected for promotion to Commander (O-5).

In March 2006, Mr. Korody reported to Naval Submarine Base New London, Connecticut where he served as a prosecutor for the northeast region of the United States, handling misdemeanor and complex felony cases including cases involving drug distribution, sexual assault, aggravated assault, attempted murder, possession and distribution of child pornography, and BAH fraud. 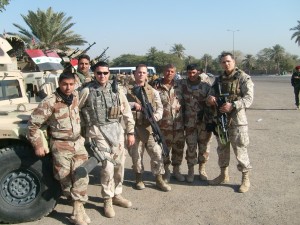 In June 2007, Mr. Korody deployed to Baghdad, Iraq, where he served as liaison officer and team leader at the Central Criminal Court of Iraq Liaison Office.  He worked closely with Federal Bureau of Investigation (FBI) and Army Criminal Investigative Division (CID) special agents to build and prosecute serious criminal cases against terrorists and insurgents including charges of terrorism, murder, and possession of explosives.  On a daily basis, Mr. Korody left the confines of his base to litigate these cases in front of Iraqi judges.

In April 2008, Mr. Korody deployed with Commander, Destroyer Squadron TWO-EIGHT, where he served as the

Mr. Korody reported to Naval Air Station Pensacola, Florida in June 2008 where he assumed duties as the Navy’s Senior Defense Counsel for the south-central region of the United States.  He represented Soldiers, Airman, Marines, Sailors, and Coastguardsmen facing administrative action or trial by court-martial throughout Florida, Mississippi, Alabama, Louisiana, Texas, and Oklahoma.

In June 2009, Mr. Korody was designated as a Military Justice Litigation Specialist by the Judge Advocate General of the Navy based on his success in the courtroom and knowledge of military justice.  Very few JAGs have received this subspecialty designation, and Mr. Korody was the most junior JAG at the time to receive this prestigious recognition.  In September 2012, Mr. Korody was selected for advancement to Military Justice Litigation Specialist II and was again the most junior JAG to receive this prestigious recognition.

In August 2011, Mr. Korody arrived at Naval Base Kitsap, Washington where he was assigned as the Navy’s Senior Trial Counsel for the northwest region of the United States, which, under his leadership, became the Navy’s busiest prosecution office.  Following the military’s push to investigate and prosecute more sexual assault cases, he was represented as the Navy’s special victims prosecutor (SVP), and oversaw the investigation, review, and prosecution of all sexual assault cases in the Navy’s third largest fleet concentration center.  Mr. Korody also served as a Special Assistant United States Attorney in the Western District of Washington, prosecuting federal criminal cases with a military nexus.

In October 2013, Mr. Korody reported to Naval Station Mayport, Florida to serve as the military justice subject matter expert for the Navy Victims' Legal Counsel Program, which became operational two weeks after his arrival.  Mr. Korody continued to represent clients in military courts, albeit from a different perspective, and directly supervised six other judge advocates.  In this position, he also became a subject matter expert on filing appeals in military courts, providing guidance to every branch of the armed forces.

The Reid Technique of Interviewing and Interrogation, John E. Reid and Associates, 2006.

PRESENTATIONS TO OUTSIDE AGENCIES AND GROUPS

Mr. Korody has litigated cases at various reserve centers throughout the United States and the following military installations: