Several times a year, every Navy Sailor (and every member of the Marine Corps, Army, Air Force, and Coast Guard) has to pee into a small plastic bottle under the eyes of an observer.  The bottle is then left in a brown box and, for most, will never be seen again by the Sailor. 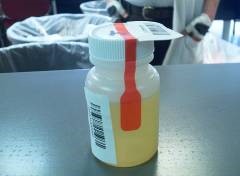 The bottle will be packaged with a dozen other bottles and shipped to a Navy Drug Screening Laboratory.  The dominant laboratories for the Navy and Marine Corps are located in San Diego, Great Lakes, and Jacksonville; each processes about one million samples per year.  If the sample tests negative during a screening test, the urine will be discarded and no one – not even the command – will receive a notification of a negative result.  One the other hand, if the screening test yields a positive result, the sample will forwarded for a confirmation test.  If the confirmation test yields a result higher than the cut-off level for the particular drug, the command will be notified of a positive urinalysis result through a message.  If the result is negative or does not exceed the cut-off level, the sample will be discarded.  A sample can test positive but not meet the cut-off level and therefore not be reported out as positive for the presence of illegal drugs. 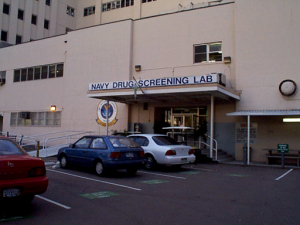 The Navy Drug Screening Laboratory traditionally tested for five substances.  The list has now expanded to include: marijuana (THC), cocaine (BZE), amphetamines & methamphetamine (including Ritalin and Adderall), ecstasy (MDMA), heroin, opiates (codeine, morphine), hydrocodone/hydromorphone (oxycodone),  and benzodiazepines (like Xanax).  The lab will also test random samples and specific samples at the request of a command for synthetic opiates commonly referred to as Spice.  A sample can be tested for steroids through a contract, non-military laboratory.

The common scenario is that a Sailor provides a sample, goes on with the normal routine, and a month later is called into a room by either military police or NCIS and read his/her Article 31b rights alleging wrongful use of an illegal drug.  The Sailor then goes to NJP and is processed for administrative separation for an Other Than Honorable discharge.

Can A Sailor Fight a Positive Urinalysis for Drugs?

Yes, with the assistance of an experienced military defense lawyer.  There are generally four angles of attack against a positive urinalysis:

Attorney Patrick Korody is a former Navy JAG who has litigated positive urinalysis cases as a prosecutor and defense counsel and at NJP, administrative separation hearings, boards of inquiry, and courts-martial. He represents Sailors worldwide who have tested positive a military urinalysis.  He offers a free consultation.